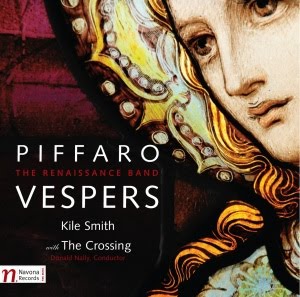 How many CDs do you own that come with an included pdf file of the sheet music or so you can follow along (or play or sing along)?

This recording, Vespers, is an exceptional treat! This is a modern restatement of Renaissance-era wind bands for a sacred context. Consier it a fusion of the 16th Century and our 21st. I think Dr. Luther would be at home and J. S. Bach would appreciate what was going on among the SATB choir, "shawms, sackbuts, dulcians, recorders, krumhorns, doucaines, bagpipes, lutes, guitars, harps, and a variety of percussion...carefull reconstructions of instruments from the period" (press release).

Liturgical portions and psalms are sung in Latin. Sung hymns (some tunes are instrumental only) are done in German!

After "Come, Holy Spirit," in Latin, one hears a transcendent heavenly setting of "O Morning Star, How Fair and Bright," Lutheran Service Book 395.

Psalm 27 leads in to an instrumental setting of an Italian tune used for "In Thee Is Gladness," LSB 818.

Psalm 113 completes the trilogy of psalms in preparation for a 13th Century tune used by the Bohemian Brethren in the 16th Century. The psalm setting is hauntingly beautiful. I simply couldn't wait to sing along. Remember that included sheet music?

The Office Hymn for this Vespers is LSB 402, "The Only Son from Heaven," a tune familiar to Lutherans as far back as 1524.

The magnificent song of Mary, featuring three solo sopranos and three vocal parts for women, is followed by The Lord's Prayer according to Martin Luther's own catechism hymn.

Vespers concludes with a tremendous instrumental triple canon of  "Now Thank We All Our God," LSB 895 and "Thanks be to God," a Benedicamus familiar to Lutherans.

Piffaro is blessed with skilled musicians, a creative composer in Kile Smith, and a daring record label, Navona Records. The combination produced a fresh, reverent, and timeless recording that is historically and musically grounded in the best of Christian liturgy and hymnody. What are they working on next?

The composition and recording of Vespers is inspired and inspiring.

"World-renowned for its highly polished performances, Piffaro, The Renaissance Band has come to be known as the pied-pipers of Early Music, delighting audiences throughout the United States, Europe, Canada and South America. The ensemble, founded in 1980, recreates the elegant sounds of the official, professional wind bands of the late Medieval and Renaissance periods, as well as the rustic music of the peasantry...

"The ensemble produces its own concert series in Philadelphia, with excerpts from these concerts being regularly broadcast nationwide on National Public Radio's Performance Today.

"For news and updates visit www.piffaro.org for more information" (email from record label). 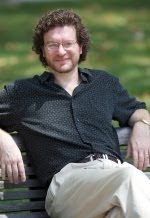 "The frequently performed music of Kile Smith (b.1956) has been praised by audiences and critics for its emotional power, direct appeal, and strong voice. He is Curator of the Fleisher Collection of Orchestral Music in the Free Library of Philadelphia, co-host of Discoveries from the Fleisher Collection, host of the contemporary American music show Now is the Time on WRTI 90.1 FM in Philadelphia, and is a substitute classical host there.

"Other recent works include Exsultet for horn and string orchestra, written for Jennifer Montone, Principal Horn of the Philadelphia Orchestra, American Spirituals, Book One for violin and piano, written for and recorded by David Kim, Concertmaster of the Philadelphia Orchestra, American Spirituals, Book Two for Anne Martindale Williams, Principal Cello of the Pittsburgh Symphony, the string quartet The Best of All Possible Worlds, and The Bremen Town Musicians for narrator, violin, and cello. Where ﬂames a word, written for The Crossing on the poetry of Paul Celan, was selected for performance at the 2009 Annual Conference of Chorus America.

"Vespers was commissioned by Piffaro, recorded with funding from the Premiere Recording Program of the Philadelphia Music Project, and released in 2009 on the Navona label. Kile has recently completed Two Laudate Psalms, a Lyric Fest commission for mezzo-soprano Suzanne DuPlantis and the Pennsylvania Girlchoir, for fall 2009 performances. The 2009-10 season will also see a performance of Exsultet, the world premiere of Now ys the tyme of Crystymas by the Virginia Chorale, and a commission for the Newburyport Chamber Music Festival.

"Kile has been Resident Composer for both the Jupiter Symphony in New York City and Musica 2000 in Bucks County, Pa. Performances have included The Voice of One Who Spoke with the Sofia Philharmonic and with Musica 2000, a Pottstown Symphony commission of Alabanza with Latin Fiesta, a 175th-Anniversary commission from Tenth Presbyterian Church, Philadelphia, for Psalm 46, a major chorus and orchestra work featuring New York City Opera baritone Todd Thomas, and Four French Carols by various orchestras" (composer's website).