Visit http://www.lcms.org/pages/internal.asp?NavID=15795 to read a cover letter introducing a set of theses on worship prepared by the LCMS Council of Presidents.
Posted by revpaulcain at 10:50 AM

Go TELL it on the mountain! The Essential Lutheran Library Is Here! 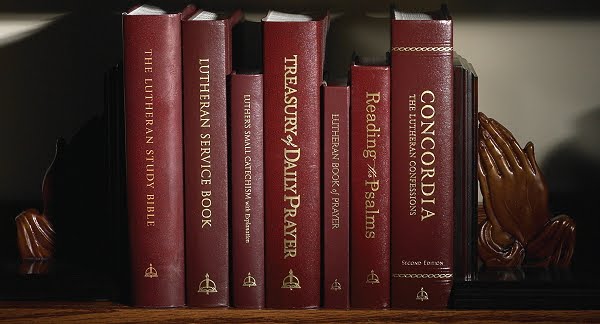 Posted by revpaulcain at 4:19 PM

Hal Leonard publications are available at music and bookstores nationwide, or through Music Dispatch (1-800-637-2852, http://www.musicdispatch.com/).
Posted by revpaulcain at 10:35 AM

Print Your Own pdf of LHP Quarterly Book Review Blog!

Click on the widget at the top of the left column to print blog entries as your own "newspaper" pdf version of LHP QBR. It will be updated as often as possible.
Posted by revpaulcain at 9:51 AM

Want to Read LHP QBR as a pdf file each day or week?

Visit the following site (http://www.tabbloid.com/), add our blog site URL, http://lhpqbr.blogspot.com/, and enter your email and delivery preferences and Tabbloid.com will make you a personal daily/weekly pdf of LHP Quarterly Book Review! 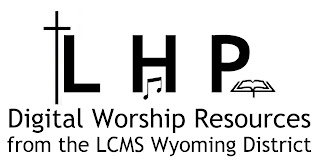 Welcome to LHP Quarterly Book Review 4.0. Usually, we've had four quarterly issues of our book review journal each year, number x.1, x.2, x.3, and x.4. X.1 is named Christmastide, and there's a lot of time before Advent begins, so items published until then will be considered QBR 4.0.

In order to better budget my time and faithfully serve in my other vocations as a Christian, husband, pastor, and school headmaster, LHP QBR will be posted here as individual blog entries. You will find the same selection of reviews, sermons, articles, and editorials, as well as occasional thoughts and other news, but just in a new format.

How can you keep up with the latest from QBR?

1. Come back and visit often.
2. Click on the "follow" box in the sidebar. You can sign in and receive email updates.
3. If you have Explorer and Outlook, click on the orange button in the top of your browser (right side). You can subscribe to updates that way.
4. Contact us for help in subscribing and/or printing.

Regular readers of QBR are quite familiar with our reviews of the InterVarsity set called Ancient Christian Commentary on Scripture. With that series nearly complete, Thomas Oden and his team of scholars have turned their attention to two new series, each a natural outgrowth of the ACCS.

We turn our attention first to a new commentary series on the Nicene Creed, Ancient Christian Doctrine . When complete, there will be five volumes. One, already released, is dedicated to the First Article of the Creed. Both the Second and Third Articles are treated in two volumes each. Future volumes will focus on the person of Christ, the work of Christ, the person and work of the Holy Spirit, and the Church.

“‘We believe in one God, the Father.’ The opening clause of the Nicene Creed can be summed up in a single word--monotheism. In the early centuries of the church, this striking doctrine stood starkly against a cultural background of multiple deities and spiritual powers. While it clearly builds on its Jewish heritage, calling God "Father" anticipates the Father-Son relationship in the Godhead that early Christians knew and robustly upheld.

“The first article of the Nicene Creed also presupposes that there is an objective body of teaching that Christians are expected to confess as their faith. This idea seems normal and natural to us, but it was a novelty in the ancient world. Neither Judaism nor any pagan religion or philosophy could claim to have a closely defined set of beliefs that everyone adhering to it was expected to profess publicly and defend against all comers.

“While this article on God the Father is the shortest and arguably oldest portion of the Creed, it fully sets forth the fundamental understanding of God as creator and originator of all that is. This commentary in its selection of texts from the early church highlights the common understanding of the One God in three Persons, elucidating the church's understanding of divine attributes and trinitarian relations” (publisher’s website).

Quotations follow the familiar pattern set in ACCS. Church Fathers were not and are not infallible, but they are listening to. Some defend tradition in addition to Scripture (31), Origen is allegorical (111), and Tertullian posits some odd theories about angels (140-1), but on the whole, the ancient interpreters cited in this volume excel best when they expound Scripture and rely not on their own understanding. I would not let a few odd quotes deter me from a treasures found within this book. We look forward to seeing the remainder of this series.

The Nicene Creed has long been a basis for unity among Christians. With the help of this new Ancient Christian Doctrine Series, I pray that the ecumenical creeds may lead us to honest discussion of differences between Christians and Christian traditions, in the hope that Scripture itself may lead us to a godly unity in the mind of Christ.

One common piece of feedback heard by ACCS editors was the request for “more.” Personally, I wanted longer selections from the fathers quoted. Sometimes I thought some quotations suffered due to lack of a full context.

Dr. Oden heard and responded with a wonderful new series called Ancient Christian Texts. Fifteen volumes have been announced to date. The series could easily be expanded.

The first volume features the commentaries of Ambrosiaster on Romans and 1-2 Corinthians. Authorship has been a topic of debate for centuries. Nevertheless, I like what I read.

“Ambrosiaster ("Star of Ambrose") is the name given to the anonymous author of the earliest complete Latin commentary on the thirteen epistles of Paul. The commentaries were thought to have been written by Ambrose throughout the Middle Ages, but their authorship was challenged by Erasmus, whose arguments have proved decisive.

“Here for the first time Ambrosiaster's commentaries on Romans and the Corinthian correspondence are made available in English translation, ably translated and edited by Gerald L. Bray.

“The commentaries, which serve as important witnesses to pre-Vulgate Latin versions of Paul's epistles, are noteworthy in other respects as well. Ambrosiaster was a careful and thoughtful interpreter, with little use for allegory, though he employed typology judiciously. Writing during the pontificate of Damasus (366-384), he is a witness to Nicene orthodoxy and frequently comments on themes related to the Trinity, the consubstantiality of the Son, the problem of the unbelief of the Jews and the nature of human sinfulness. He had a keen eye for moral issues and often offers comments that reflect his knowledge of how the church had changed from the time of the apostles to his own day.

“This commentary offers a rich repository of insight into the thinking of pre-Reformation church leaders for the leaders and teachers of the church today” (publisher’s website).

Some of the commentaries planned for publication have not seen the light of day in English translation. Knowledge of Greek and Latin was a more common skill in society in the past, but has sadly fallen further into disuse.

As a whole, the commentator we call Ambrosiaster does not stray very far from the text. I noted questionable interpretations with a sticky note that stuck out from the margins at an angle. There were only a few.

Who was Ambrosiaster? I found the answer to be absolutely Hilarious, or rather, Decimus Hilarianus Hilarius, according to the translator (xv).

In his introduction to Romans (1ff), Ambrosiaster notes the importance of God’s grace and faith, and why Paul went to such trouble to wean them off of the law. Had this book seen better circulation, Martin Luther would not have been seen as such a radical. Ambrosiaster is often quoted by the Lutheran Reformers in their confessions, called Concordia or The Book of Concord.

In 1 Corinthians 11, some will hear the language of the Eucharist as “the memorial of our redemption” (174) which it is, but also clear teaching on real presence: “Paul teaches that one should come to communion with a reverent mind and with fear, so that the mind will understand that it must revere the one whose body it is coming to consume. We ought to judge this inwardly, because it is the Lord’s blood we are drinking in the mystery, and he bears witness to the mercy of God. If we receive him in a self-disciplined manner, we will not be unworthy of the body and blood of the Lord, for it will appear that we are giving thanks to the Redeemer” (175).

Consider using Ambrosiaster on 2 Corinthians 8-9 when teaching stewardship of time, talents, treasure, self, and the gospel (236).

If there is a weakness of both Ancient Christian Doctrine and Ancient Christian Texts, it would be the price of each volume. I would encourage the publisher to offer paperback and electronic versions of both new sets and to consider lowering the price point, or to offer discounts on a regular basis. A 20-30% discount is available through IVP for individual volumes. Discounts also apply for ordering the entire sets. You may find a “deal” at an online bookseller as well. Budgeting and saving for these volumes will be worth the investment!


A new issue of LHP Quarterly Book Review is now available. To directly download the current issue, go to http://wy.lcms.org/lhp/QBR/2009AngelsQBR0304.pdf.
Visit our archives at http://wy.lcms.org/lhp/QBR/.
Would you, as a reader of QBR, prefer that we keep our current downloadable format, or should we move to a blog only format?
If you have any questions or concerns, please contact us.
Paul
The Rev. Paul J Cain
Editor, LHP Quarterly Book Review
Wyoming District Worship Chairman
Listen to Pastor Cain's sermons online at http://www.myspace.com/immanuelsheridan
Posted by revpaulcain at 2:10 PM