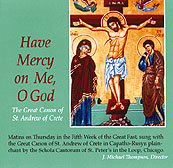 As the millennium approaches [CD released in 1998], the Church is being called to repentance and renewal. For centuries, this call has been facilitated in the Byzantine Churches by the Great Canon of St. Andrew of Crete—a long poetic meditation on sin and repentance complete with the imagery of the Scriptures. Now for the first time sung in modern English and in its proper liturgical context, Have Mercy on Me, O God presents both the piety and artistry of Byzantine liturgical music that is easily accessible for Western Christians.
Selections are:
Also available for download on Amazon and iTunes.

J. Michael Thompson, director of music ministry at St. Peter's Church, is the founder and director of the Schola Cantorum. He has been a pastoral musician and liturgist for twenty years, as well as a composer, author, and a noted promoter of the Liturgy of the Hours and Gregorian chant in contemporary parish situations.

This recording omits some portions of the service due to time considerations on a CD recording. They are noted in italics in the liner notes.
Lutherans will note references to Mary as Theotokos, which has been historically accepted language in the Church. Unfortunately some of the language is directed to Mary in prayer or song. Such could be rewritten or omitted in a Lutheran Great Canon.
The Capatho-Russian plainchaint is reminiscent of Znamenny chant I have heard from other sources. Both include a stirring "ison" or bass part of sustained notes. Such music appears to be accessible to singers of a variety of skill levels and should be explored and perhaps transplanted to the Lutheran tradition, especially in smaller congregations with limited musical resources to aid a capella singing.
I would very much like to see sheet music (or chant tones) for the Odes for use as alternate canticles for choral or congregational use.
Our second recording by The Schola Cantorum contains sixteen tracks of music for today [Maundy Thursday] through Sunday. 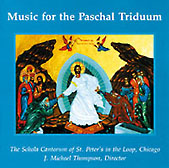 Music for the Paschal Triduum is a recording of chant and polyphony for the "three-days-which-are-one-day": Holy Thursday night, Good Friday, Holy Saturday, and Easter Sunday. Using music from the Western (Roman, Anglican, and Lutheran) and Eastern (Slav-Byzantine churches of Carpatho-Rus, Ukraine, and Russia) Churches, the Schola Cantorum conveys the mystery and majesty of the celebration of the death and resurrection of Jesus Christ.
The melodies associated with the texts and ritual actions of the Triduum both evoke the memory of the event, and when included in the celebration, help make it happen in the present.
Selections are:
Also available for download on Amazon and iTunes.

J. Michael Thompson is the director of music ministry at St. Peter's Church, where he is the founder and director of the Schola Cantorum. He has been a pastoral musician and liturgist for twenty years, as well as a composer, author, and a noted promoter of the Liturgy of the Hours and Gregorian chant in contemporary parish situations.

Using the chant of Ubi Caritus as a cantus firmus, track one features a 1995 Bart Bradfield choral harmonization. Other Roman rite contributions include Lamentations from Tenebrae (5), a Tract making use of Psalm 42 (9), The Canticle of Moses from the Great Vigil (10), and the Office Hymn for Vespers from Easter to Ascension (13).
The Anglican rite is represented by track fourteen, a canticle centonizing Romans 6:9-11 and 1 Corinthians 15:20-22, very similar in form to the New Testament Canticle of the Service of Prayer and Preaching in Lutheran Service Book.
Eastern Churches are well-represented on Music for the Paschal Triduum:
Lutheran Listeners may recognize Jaroslav Vajda's text on track number two. You will also note that track six is nearly twenty-five minutes long. Choral portions and vibraphone chords pepper this 1976 Concordia Publishing House setting of the Passion according to St. John. Unfortunately, John 19:31-42 was omitted due to the time limitations of a CD.
Other than occasional prayers or canticles to creatures rather than the Creator, my only disappointment with these two fine recordings from The Liturgical Press is that they were so short. In a day of internet downloads and vigorous sales on iTunes, I would recommend that the publisher and The Schola Cantorum consider restoring the omitted portions in special re-releases of their recordings at the next opportunity.
The Rev. Paul J Cain is Pastor of Immanuel Lutheran Church, Sheridan, Wyoming, Headmaster of Martin Luther Grammar School, a member of the Board of Directors of The Consortium for Classical and Lutheran Education, Wyoming District Worship Chairman, and Editor of QBR.
Posted by revpaulcain at 2:39 PM