LHP Review: Sexuality in the ELCA/ELCIC

A dear seminary professor shared with us students the problem he perceived in his generation of Lutheran pastors: they are unwilling to "do theology."

I am impressed with the dual mandate provided by Ascension Lutheran of Calgary, Alberta (Canada) that led to both The Banff Commission and The Jasper Commision to actually study theology! 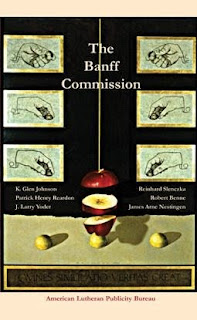 Why must the exercise of "doing theology" be so rare in modern Lutheranism? Why must the term "Lutheran" in the United States be so linked in the mind of the average media-influenced person to the three resolutions passed in August by the ELCA National Assembly?

Banff addresses "the same sex relationships debate and the turmoil and division that are occurring at every level in the church's life" (back cover).

Jasper, the second commission, reprints essays that "articulate how pastors and congregations who hold firmly ot the biblical witness on marriage and sexuality might more effectively minister to all persons--regardless of what they consider their sexual orientation to be" (back cover).

Sections in this thinner volume (46, 52) could be easily misunderstood in the current American/Canadian "politically correct" understanding of "welcome" and "tolerance" in contrast to the Biblical witness.

Thanks to the ALPB, these essay collections are now available to a wider audience in North American Lutheranism. Unfortunately, their advice was not heeded at the Minneapolis ELCA Churchwide Assembly. Both Banff and Jasper could continue to serve those working toward reform for congregations and clergy remaining within the ELCA and sister bodies, as well as for those departing.