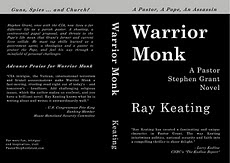 Keating, Ray. Warrior Monk (A Pastor Stephen Grant Novel). Manorville, NY: Keating Reports, 2010. 442 Pages. Paper. $18.00.  https://www.createspace.com/3481414 www.PastorStephenGrant.comhttp://www.pastorstephengrant.blogspot.com/ (N)
I read the adventures of Jack Ryan by Tom Clancy. Like many, I've probably seen most of the James Bond films. And I've always been uncomfortable with the language and adult situations.
Warrior Monk by Ray Keating has all of the adventure, intrigue, and believable improbability of mainstream political thrillers, but with a lead character, Pastor Stephen Grant, that resists temptation. (Note the Monk in Warrior Monk.) No, I'm still not endorsing all of the colorful language here, but plot and main idea of Pastor Grant is worth putting up with the occasional foul language.
The basic idea is quite interesting, especially for a Lutheran pastor in Wyoming. (My portable Mass Kit is a repurposed handgun case. When our recent golf outing for Spring Pastors' Conference was canceled due to high wind, some of us went to the firing range instead.)
Stephen Grant was raised in a Lutheran home. He served the CIA "analyst." "More than fifteen years later," Grant has returned to the confession of faith of his youth and serves St. Mary's Lutheran Church (LCMS) on Long Island. He is friends with a Roman Catholic Priest and an Anglican Church in North America Rector. They eat, golf and theologize together.
Eco-terrorists target St. Mary's and Grant saves the day, though not all of his parishioners. That catches the attention of the agency, who sends his own former partner back to get him to protect a new African Pope on an unique ecumenical endeavor. Grant receives the blessing of his own LCMS President, "Harrison Piepkorn," and appears to abide by LCMS theology and practice.
I will take issue with the author's use of the false idea that Luther's "A Mighty Fortress" used a "bar tune." No. He used "bar form," a technical musical term that has been misunderstood. No tavern tunes were involved. One may have been used initially for Luther's Christmas hymn "From Heaven Above," but when Luther heard some singing the tavern words, he found a new tune quickly. I want to address this issue because it is one that has led Christians in recent times to use Luther as an excuse or as permission to use secular music in the Church.
This novel was well worth my time. I loved the adventure story. It is as much a theological thriller as Maier's A Skeleton in God's Closet. I wonder what Ray Keating has in store next for Pastor Stephen Grant.
The Rev. Paul J Cain is Pastor of Immanuel Lutheran Church, Sheridan, Wyoming, Headmaster of Martin Luther Grammar School, a member of the Board of Directors of The Consortium for Classical and Lutheran Education, Wyoming District Worship Chairman, and Editor of QBR.
Posted by revpaulcain at 1:45 PM