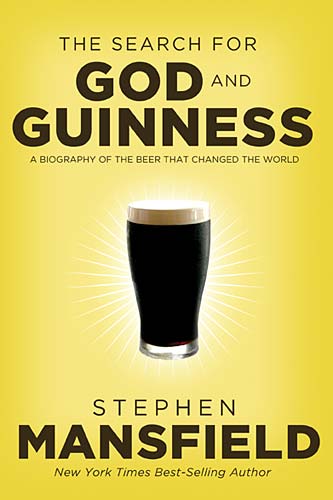 Mansfield, Stephen. The Search for God and Guinness: A Biography of the Beer that Changed the World. Nashville: Thomas Nelson, 2009. 273 Pages. Cloth. $24.99. http://www.thomasnelson.com/ (LHP)


I personally celebrated the days leading up to St. Patrick's Day by reading this stout book.

"The history of Guinness, one of the world’s most famous brands, reveals the noble heights and generosity of a great family and an innovative business.

"It began in Ireland in the late 1700s. The water in Ireland, indeed throughout Europe, was famously undrinkable, and the gin and whiskey that took its place was devastating civil society. It was a disease ridden, starvation plagued, alcoholic age, and Christians like Arthur Guinness—as well as monks and even evangelical churches—brewed beer that provided a healthier alternative to the poisonous waters and liquors of the times. This is where the Guinness tale began. Now, 246 years and 150 countries later, Guinness is a global brand, one of the most consumed beverages in the world. The tale that unfolds during those two and a half centuries has power to thrill audiences today: the generational drama, business adventure, industrial and social reforms, deep-felt faith, and the beer itself" (publisher's website).

Author Stephen Mansfield is known for his religious biographies of Barack Obama, George W. Bush, and our American troops. This is a biography of a beer. No, there's nothing wrong with that. Thomas Nelson is the publisher. Christians should have no problem with moderate use of alcohol.

"Martin Luther...was among the great beer lovers of Christian history" (28).

"Rather than emphasize beer as an antidote to drunkenness, as a healthy alternative to harder drinks that, in excess ruined men's lives, Prohibitionists treated all acolol as the same. This not only meant that consumption of hard liquor rose during Prohibition, but that the idling of breweries removed the societal benefits of beer in the post-Prohibition years" (221).

The Guinness story encompasess the famous stout beer, but also "how the Guinnesses used their wealth to help so many people." Many are unaware of the clergy and missionaries of this famous family, not to mention the famous Guinness Book of World Records!

I was fascinated by the narrative espoused in the book that beer may be in part responsible for cities and civilization (12, 267). One wonders how the first beer got made. How many happy accidents would it take to figure out the process in ancint times with no modern knowledge of yeast, or even in the day of the German Purity Law?

"Yet what distinguishes the Arthur Guinness story is not just that he brewed good beer and sold great amounts of it. What distinguishes his story is that he understoood his success as forming a kind of mandate, a kind of calling to a purpose of God beyond just himself and his family to the broader good he could do in the world. To understand this, though, we must understand the religious influences that shaped Arthur Guinness's life" (59). We are dealing with vocation, as the author notes later: "The matter really comes down to how we determine what is holy...The problem became, though, that the daily lives of men were not considered part of the holy...Luther and Calvin...insisted, instead, that God called men not just to offices in the church, but to every kind of labor and trade" (157, cf. 159). The entire section is great reading!

What is "the Guinness Way?"
What distinguishes this book is its fresh subject matter, clear and interesting writing, engaging and inspiring stories about the generations of Guinesses who led the same company, the varied philanthropic work and donations flowing from a confession of Christ, and of course, the beer.

Learn about the difference between ales/stouts and lagers (245). Consider the various Christian affliations and causes of the Guinness family members (176, 196, et al). Why the harp symbol? See 100-101. Why beer? "Beer, well respected and rightly consumed, can be a gift of God. It is one of his mysteries, which it was his delight to conceal and the glory of kings to search out. And men enjoy it to mark their days and celebrate their moments and stand with their brothers in the face of what life brings" (xxvi).

Celebrate St. Patrick's Day with a Guinness and this good book.