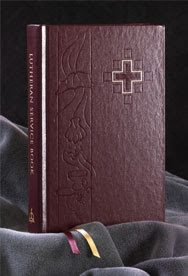 Four years have come and gone since the August advent of Lutheran Service Book in 2006. The official release date was in September, but I was overjoyed when copies of the pew edition arrived early. I was similarly happy when this review copy recently showed up!

Our Wyoming District had seven introductory workshops, one for each circuit. Attendance was high. Adoption was even better. In less than two years, all but two congregations in our district adopted LSB. (One uses TLH and the other had recently purchased new copies of both TLH and LW.) In the LCMS today, at least 70% of synod congregations have LSB in the pews, a larger percentage than LW had in its entire lifetime! 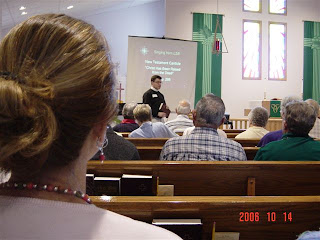 Well before the announcement of The Lutheran Hymnal Project, (whose LHP acronym we borrowed for Liturgy, Hymnody, & Pulpit soon after LSB was officially named,) I encountered a lot of hard feelings about the 1982 Lutheran Worship and fear that the next LCMS hymnal would be more of the same vein. I was happy to share then that four-part harmonies and traditional texts and melodies would return. LW's DSI was the reason so many stayed with TLH. "Page 136" simply wasn't "page 15." Singing the unsingable LW tune for "Fight the Good Fight" wasn't worth the fight with musicians and congregations by about 1983. And "My Faith Looks Trustingly" didn't go over at the nursing home or sanctuary.

The promise of The Lutheran Hymnal Project was made manifest in Lutheran Service Book, thanks be to God!

LSB meant a return to the cherished versions of hundreds of hymns (text and harmony), the Common Service, Matins, Vespers, and much more. LSB preserved so much of TLH that it is in many respects a larger print version of our beloved 1941 hymnal.

LSB also carried forward new favorite services and song from LBW/LW. The October 2006 ELCA hymnal, Evangelical Lutheran Worship still has two settings of Divine Service and the basic musical form of three prayer offices in common with LSB. LSB preserved them more faithfully than its distant cousin, ELW. Though completely unrelated works, ELW and LSB  have a strange connection in my mind beyond the historical development of Lutheran Book of Worship and Lutheran Worship. Both new hymnals introduce some new common hymn texts and even more new hymn tunes in common. LSB is far more user-friendly due to an unique page-numbering system. And I must confess my amazement at the irony of the names. The LCMS Lutheran Service Book title sounds very familiar to Service Book and Hymnal used by the predecessor bodies of the ELCA. And the ELCA Evangelical Lutheran Worship sounds closer in name to our LCMS Lutheran Worship than the result of the work of the Inter-Lutheran Commission on Worship, Lutheran Book of Worship.

It is probably more accurate to call this the revised LCMS hymnal than a new hymnal.

Dedication Sunday for the new book for the pews was a special day at the congregation I served in the fall of 2006. We borrowed an idea from a sister congregation and made an LSB cross display out of LSBs. 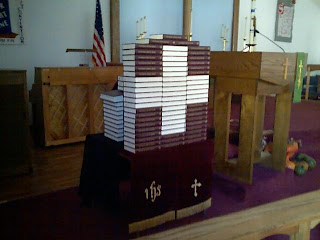 It was easy to plan services that could have been sung out of TLH for the first few weeks. Congregation members appreciated the larger print, off-white pages, and durable cover. Our altar guild had pre-treated the ribbons so that they would not fray, another idea borrowed from another sister congregation. Our local LWML group had a wonderful idea of their own. They gave scholarships to all the youth of the congregation to the introductory workshop so they could all get their own copy of the hymnal. Wouldn't that be a great tradition to begin and continue?

I hear many similar encouraging comments from the congregation I currently serve, one that also quicly adopted LSB after careful and extensive pastoral preparation by my immediate predecessor.We currently pair DS3 with Matins for a season of the Church Year and alternate with DS1 and Service of Prayer and Preaching. Our schoolchildren have helped the congregation learn Evening Prayer as an alternate for Vespers. They will be working on Morning Prayer this school year in preparation of introducing it and DS4 next summer. My plan then is to rotate through three pairs of services that would be used for at least a month at a time: DS1 and Morning Prayer; DS3 and Matins; DS4 and Prayer & Preaching.

I love to use LSB  to teach members (new and long-time) about worship. I love the catechetical covers and new stoles to match. (I bought the green stole to mourn the end of the LCMS Commission on Worship due to 2010 Convention 8-08A.) 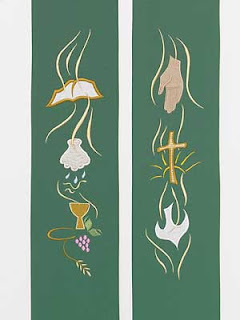 With so many new hymns, songs, and canticles, Lutheran Service Book serves a choir well. A choir's first job is to help lead the singing of the congregation, assisting the pastor and parish musicians in that regard. There is also plenty of special music and variety within the settings of Divine Service and Daily Office.

We extensively use Lutheran Service Builder to produce hymn booklets and legal CDs for school and VBS. We also love the copyright license built-in so we can make legal CDs of services for our members, especially shut-ins.

Is this a perfect book? No, because no human work is, nor could any one hymnal perfectly please a group of sinful human beings. I wanted all 150 psalms and the Augsburg Confession included. I have a short list of hymns I would like to see added or deleted. And I had hoped that "and with your spirit" would replace "and also with you" as was the case in Hymnal Supplement 98, a major source of new material to LSB. That said, my enduring concerns are minimal compared to my critique of most other Lutheran or Christian hymnals in print. LSB provides a common core repertoire of text and song with which we can walk together as Christian pastors and congregations for decades to come.

Prices of the pew edition and other support resources have only modestly increased since the time they were released. Congregations were notified in advance of special introductory sales and when they would expire. That speaks well of Concordia Publishing House. If your congregation has not yet invested in the rest of the LSB library, now is the time to do so. These would make great Christmas gifts to one's congregation or be deserving of memorial funds.
And don't forget other volumes of the CPH Essential Lutheran Library with covers that match:

It's a great time to be a Lutheran when so many faithful resources are newly available! Lutheran Service Book is the best hymnal ever produced by The Lutheran Church--Missouri Synod. It can be a tool toward greater unity in doctrine and practice in the LCMS because of its harmonious and faithful singing of God's Word and winsome confession of our Concordia: The Lutheran Confessions.


The Rev. Paul J Cain is Pastor of Immanuel Lutheran Church, Sheridan, Wyoming, Headmaster of Martin Luther Grammar School, a member of the Board of Directors of The Consortium for Classical and Lutheran Education, Wyoming District Worship Chairman, and Editor of QBR.