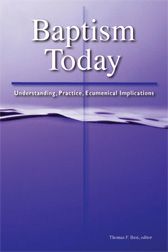 Baptism Today: Understanding, Practice, Ecumenical Implications is a publication of the World Council of Churches. As such, the breadth of investigation regarding the present-day faith and practice surrounding Christian baptism is worldwide. The book is divided into five sections, the first and fifth being the most valuable.
The first section is an assembly of short articles written by various authors from wide and extremely diverse theological positions regarding the practice and implications of baptism. The traditions represented range from Roman Catholicism, various Orthodox Church bodies, historic Protestantism, Baptistic churches, Pentecostalism, Quakerism, Seventh-day Adventism, to the Salvation Army. Many of the articles are well-written but a few are of lesser quality. They are not extensive, biblical investigations of baptism from a particular confessional viewpoint, nor is that the intent of the book. Rather, the primary focus of the book is the practice of baptism within various church traditions and how such practices demonstrate convergence and divergence within the larger Christian community.
Much in the first section is enlightening. Some Baptist traditions, for example, recognize infant baptism or at least do not require a subsequent believers’ baptism for new members. The chapter on baptism within the Quaker Tradition is most engaging in light of the fact that Quakers categorically reject water baptism (!) in favor of baptism in the Holy Spirit. The Salvation Army recognizes baptism and the Lord’s Supper but does not require either for membership. The Roman Catholic and Orthodox articles present the richest liturgical and historical understanding of baptism, whereas the Lutheran article represents the most Biblical treatment of baptism. That being said, it is disappointing to read the Lutheran author’s conclusion that mutual recognition of baptism is sufficient for altar fellowship among the various church traditions.
The second section, consisting of three articles written in response to those of the first section, is disappointing. All three authors identify the pervasive influence the liturgical movement has had on all traditions and their baptismal liturgies. The lines of convergence are emphasized; deep rifts of separation are acknowledged but largely downplayed.
The third section, signs of recognition, is interesting in that it provides very concrete examples of various churches officially recognizing each other’s baptism. Eleven different church bodies in Australia, for example, have agreed to use a common baptism certificate. The only theological statement found on the certificate is that the person named was baptized with water in the name of the Father and of the Son and of the Holy Spirit. The certificate demonstrates each church’s acceptance of the other churches’ baptism. But the lack of any statement of significance about baptism’s meaning leaves one to wonder if the eleven churches have much agreement about what happens or does not happen in baptism.
The fourth section, special issues, contains two articles, one of which may be of interest to LCMS Lutherans. The article of interest is about the challenges and opportunities represented in Sweden, a Lutheran country. Although Sweden is considered by many to be one of the most secularized nations of the world, Swedes consider baptism to be of supreme importance. Most Swedes are baptized. The challenge is found in informing their sense of importance with a Biblical understanding of baptism and its connection to the on-going life of the church.
The fifth section, baptism liturgies, assembles the liturgies being used by the various traditions represented in the first section of review articles. Those traditions that do not practice baptism, Quaker, Salvation Army, etc., could not contribute to this section. Having the various liturgies compiled in a single resource is worthwhile and helpful for deeper study and comparison.
Baptism Today is a useful book provided that one understands its scope and purpose. An in-depth reflection on baptism’s importance Biblically, historically, or liturgically within various church traditions will not be found in this volume, nor is this intended. What it does lack in depth it makes up for in breadth. There does appear to be a growing acceptance of baptism administered among the various Christian traditions. In spite of the optimism expressed by many of the authors, the understanding and significance of baptism among Christian traditions does not show any signs of consensus.

The Rev. Kenneth Mars is pastor of St. John's Lutheran Church, Kimball, Nebraska and Immanuel Lutheran Church Burns, Wyoming, Secretary of the Wyoming District of the LCMS, and a regular QBR contributing reviewer.
Posted by revpaulcain at 2:06 PM