....modern liberalism, pietism, feminism, and outright neglect. That is from what Reclaim is reclaiming Lutheran hymnody and liturgy.

The first booklet deserving of your attention is the Introductory Edition, pictured below. 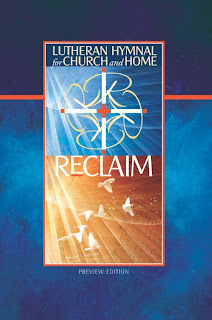 It first appeared in June of 2006, just before Lutheran Service Book in August, and more importantly for its intended audience, well before Evangelical Lutheran Worship in October of that year.

The LCMS rushed a redaction of Lutheran Book of Worship, in part, out of fear that our congregations would buy it. Lutheran Worship was put together in 18 months followed by another 18 months at the publishing house. Yes, it was a blessing. But it could have been so much more. And so now I am thankful for Hymnal Supplement 98, the Lutheran Hymnal Project, and Lutheran Service Book.

My first impression of RECLAIM? Honestly, it was one of "duplication of effort." Why didn't these folks get our LSB?

My second impression was more producive, compassionate, and thoughtful: "Oh. These folks were truly excluded in a meaningful way from Renewing Worship and the production of Evangelical Lutheran Worship and now want to show their Lutheran audience (pastors and congregations) what could have been had the ELCA/E?CA not gone off the liturgical and moral deep end."

The Introductory Edition includes the Catechism, Divine Service, orders for Baptism, Wedding, and Funeral, plus four dozen hymns or songs and some initial apologia for their kind of Lutheran hymnal, one to be used at church and at home.

The St. Paul's Setting of "The Service with Holy Communion" appears to be serviceable and singable. I was blessed to see it in a lay-flat spiral binding appropriate for an organist or pianist. "And with your spirit" is the response to "The Lord be with you" (21). I like the "We" for the Nicene Creed due to its historicity. I am concerned that the Prayer of the Church may not wear well over time. Hymns are ones that are largely well-known to Lutherans, with a few weak hymns from the 1800's or 1900's. "I Love to Tell the Story" was a favorite of mine until I realized that it really didn't tell much of a story. I have heard Mormons (RLDS/Community of Christ) sing "Lord, I Lift Your Name on High" without having to change any of the vague words. "Majesty" would need stronger hymns sung with it at a service if it were used. I do like Gracia Grindal's closing thoughts (118ff) that say "it was the words that make a hymn Lutheran," arguing for good theology, whether the hymn was written by a Lutheran or had a more ecumenical or so-called "contemporary" origin.

Relcaim Resources also has a 2009 Provisional Hymn Booklet. Thirty-one more hymns are provided for consideration. In brief, the hymns are new or newly rescued from obscurity. Tunes are immediately singable or at least teachable. Motivation to learn some of them will come from their provenance.

In addition to the St. Paul's Setting, Reclaim has released a Setting II, composed by North Dakota Pastor Douglas Norquist. Provisional materials are a good opportunity to try something new, and then make adjustments where needed. I would recommend that a congregation wanting to attempt this setting should learn it from another congregation that already uses it. That is part of the challenge for a reviewer like me, to hear in my mind a whole congregation singing (or attempting to sing) a new liturgical setting or hymn or song. Leader, pew, and accompaniment editions are available. 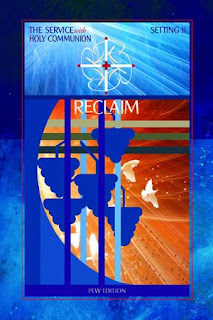 Lutheran worship should always be based on a solid, Biblical, Confessional, and authentic Lutheran theology of worship. Fulfilling that gap among some Lutherans are the proposed series of Blue Papers of Reclaim Resources, beginning with Reclaiming the Lutheran Liturgical Heritage by Oliver K. Olson.

In some circles, Dr. Olson is a persona non grata. He shared "inconvenient" thoughts with regard to LBW's proposed eucharistic prayers. It is dangerous when a Lutheran body, especially those putting together a hymnal, should ignore or contradict Dr. Luther. Rejection of Luther should have been a harbinger. And now it has led to more. (We in the LCMS dare not be smug, either. When Luther's Flood Prayer was proposed for LSB, some in our doctrinal review process had objections until it was pointed out that Luther himself was the author. We need to reclaim Luther in the LCMS.)

Why is it that Baby Boomers are "surprised" when younger generations want the kind of worship the Boomers rejected? 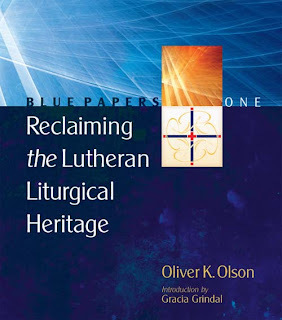 A couple choice quotes from Olson:

"As a son of the Western Church, Luther favored liturgical continuity and maintaining ancient liturgical treasures. Following his example, the evangelical Lutheran church has inherited the finely-wrought collects constructed on the rigid rules of fourth-century rhetoric; the (post-Gregory) liturgical use of the Nicene Creed, once filed away as just a theological document. We have also inherited the Ordinary of the Mass:  the Kyrie Eleison, the Gloria in Excelsis (queen of all Christian hymns), the Sanctus (a marriage of Isaiah's outcry and Jerusalem's shouts to welcome Jesus) and the Agnus Dei.. For two hundred years after the Reformation, Lutheran and Roman Catholic churches, common heirs, used each others' composed masses.

"'We do not abolish the Mass,' echoes the Augsburg confession, 'but religiously keep and defend it.' [AC XXIV: 1] Until the opposition got organized, in fact, much of Europe was convinced that Luther had preserved the pure, ancient, apostolic, catholic tradition" (40).

"Because it was adopted by almost all synods, from the Swedes and the Norwegians to the Germans, including the Missouri and Wisconsin synods, the Common Service was a near-miracle of Lutheran unity, something that has not yet had the scholarly attention it deserves" (41).

RECLAIM is a work in progress. It deserves our attention. It is a group worthy of the support of those who want Lutheranism within the Evangelical Lutheran Church in America (and those who have recently said farewell). It is my hope and expectation that the fruit of this hymnal project may serve the new Lutheran body/bodies that emerge from the collapse of the ELCA.

And perhaps, just perhaps, it may lead to a conversation with others in American Lutheranism who still remember Muhlenberg's dream.

Posted by revpaulcain at 4:33 PM