In a time when popular culture celebrates the lack of faith, even overt hostility toward Christianity, Lars
Walker arrives to present an adventure novel that celebrates and encourages the Christian faith.

"Lars Walker’s third novel about the Vikings begins in the year 1001. King Olaf Trygvesson is dead, but his sister’s husband, Erling Skjalgsson, carries on his dream of a Christian Norway that preserves its traditional freedoms. Rather than do a dishonorable deed, Erling relinquishes his power and lands. He and his household board ships and sail west to find a new life with Leif Eriksson in Greenland. This voyage, though, will be longer and more dangerous than they ever imagined. It will take them to an unexplored country few Europeans had seen. Demonic forces will pursue them, but the greatest danger of all may be in a dark secret carried by Father Aillil, Erling’s Irish priest" (publisher's website). 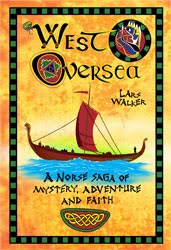 West Oversea is about a clash of cultures, specifically, old Nordic paganism and its mores with the relatively new Christianity (at least to these peoples) and its morality. How would a former pagan, now Christian, explain supernatural events, seemingly mythic talismans, and vivid, near-prophetic dreams? This novel gives a good possible explanation.

Journey along with Father Aillil and company as "they sail West Oversea to Greenland, home of Leif Ericksson" (back cover) and to the strange lands to the West.

My unease at times while reading, in retrospect, means that I identified with the struggles of Father Aillil, since I am a parish pastor myself. He is earthy, very human, and struggling with the old world and religion of those whom he serves, and the implications of Christianization. The old saw, "We've always done it this way," no longer applies in this new Christian world of one thousand years ago. Readers will struggle along with the sinner/saint Aillil. He is tempted, yet faithful. He is much like the venerable Dr. Martin Luther, merely 500 years ahead of his time.

The names of the characters, both real and imagined, were fascinating to me. Some I didn't dare to try to pronounce without help from the List of Characters helps on xiii and following.

Walker shows parallels between this world of a millenia ago and ours today. There are dangers and opportunities (consider the dream of 195ff). Christ always remains our hope: yesterday, today, and forever!

We at QBR commend Nordskog Publishing in their new imprint, Nobel Novels. We encourage the publication of more new works that celebrate (rather than denigrate) Christianity, and we look forward to much more from Lars Walker!

"Lars Walker is a native of Kenyon, Minnesota, and lives in Minneapolis. He has worked as a crabmeat packer in Alaska, a radio announcer, a church secretary and an administrative assistant, and is presently librarian and bookstore manager for the schools of the Association of Free Lutheran Congregations in Plymouth, Minnesota. He is the author of four previously published novels, and is the editor of the journal of the Georg Sverdrup Society. Walker says, “I never believed that God gave me whatever gifts I have in order to entertain fellow Christians. I want to confront the world with the claims of Jesus Christ.” His Website address is http://www.larswalker.com/. He blogs at www.brandywinebooks.net" (publisher's website).