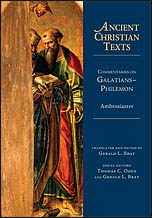 The next offering in IVP Academic's Ancient Texts Series is another volume of commentaries by Ambrosiaster on the epistles of St. Paul.

"Ambrosiaster ("Star of Ambrose") is the name given to the anonymous author of the earliest complete Latin commentary on the thirteen epistles of Paul. The commentaries were thought to have been written by Ambrose throughout the Middle Ages, but their authorship was challenged by Erasmus, whose arguments have proved decisive.


"The commentaries, which serve as important witnesses to pre-Vulgate Latin versions of Paul's epistles, are noteworthy in several respects. Ambrosiaster was a careful and thoughtful interpreter, who made little use of allegory, though he employed typology judiciously. Writing during the pontificate of Damasus (366-384), he is a witness to Nicene orthodoxy and frequently comments on themes related to the Trinity, the consubstantiality of the Son, the problem of the unbelief of the Jews and the nature of human sinfulness. He had a keen eye for moral issues and often offers comments that reflect his knowledge of how the church had changed from the time of the apostles to his own day.

"Here for the first time his commentaries on Galatians, Ephesians, Philippians, Colossians, 1-2 Thessalonians, 1-2 Timothy, Titus and Philemon are made available in English, ably translated and edited by Gerald L. Bray" (publisher's website).


Good commentators "allow the text to speak for itself" (xi). Ambrosiaster excels in this regard. It is unfortunate that most Reformation Christians (apart from those who could read Latin) were deprived of Ambrosiaster's commentaries for so long. "Anyone who believes in Christ but still observes the law of works does not understand Christ correctly" (1). The commentary gets off to a great start.

Ambrosiaster continues to let the text speak in Ephesians. Consider this on 2:8-10: "It is true that we must render all thanks to God who has given us his grace to recall sinners to life even when they are not looking for the true way. Therefore there is no reason for us to glory in ourselves, bur rather in God, who has regenerated us to a heavenly birth through the faith of Christ, so that tested by the good works which God has appointed for those who are already born again, we may deserve to receive the things promised" (40).

And later in Ephesians 6: "Children should also remember that they will one day be parents, and they will nto want their own children to disobey them" (60). This is another treasure trove of pastoral care, rich wisdom, and sermon illustrations!

That pastoral care extends to what he says Titus 3: "This good whaich is seen ot flourish in Chrisnas stems from the root of divine godliness. God in his mercy has saved us through Christ, by whose grace we have been born again and now receive the Holy Spirit in abundance, so that we may excel in good works. He will help us in everything, so that by these things we may inherit the kingdom of heaven. For this reason we must follow him with all devotion and obey his commands, because if there is anything beautiful in us, he has painted it with spiritual brushstrokes" (159).

This is beautiful, Biblical, evangelical theology. As a Lutheran Christian, I rejoice in the gift of more Ambrosiaster!


Consider this background statement of purpose for the ACT series, quoted from their sampler:


"A multiyear project of 14-15 volumes such as this requires a well-defined objective. The task is straightforward: to introduce full-length translations of key texts of early Christian teaching homilies and commentaries on a particular book of Scripture. These are seminal documents that have decisively shaped the entire subsequent history of biblical exegesis, but in our time have been largely ignored. To carry out this mission the ACT series has four aspirations:

1. To show the approach of one of the early Christian writers in dealing with the problems of understanding, reading and conveying the meaning of a particular book of Scripture.

2. To make more fully available the whole argument of the ancient Christian interpreter of Scripture to all who wish to think with the early church about a particular canonical text.

3. To broaden the base of biblical studies, Christian teaching and preaching to include classical Christian exegesis.


Look for more from IVP Academic and the Ancient Christian Texts series in LHP QBR.